JusticeMakers Bangladesh congrats the sexual minority transgender woman for being elected as a member of union council in Kushtia!

Bangladeshi human rights organization JusticeMakers Bangladesh has congratulated and wished the transgender woman Payal Khatun for being elected as a female member in Kanchanpur Union Parishad (UP) of Sadar Upazila of Kushtia district of Bangladesh.

According to the news published by Voice of America's Bengali section online on November 4, 2022, Payal Khatun, a transgender woman elected as a member of the Union Parishad in Kushtia district of Bangladesh and she is the first elected public representative of the third gender in Kushtia district.

Payal was elected as UP Member by getting 1,623 votes. Payal Khatun is son of Liaquat Ali of Belgharia village of Kanchanpur Union.

According to the locals, Payal was a man before. Payal went to Kolkata around 2010-11 and changed her gender when suddenly there was a change in Payal's body. When she was a man her name was Helal. Payal's leadership qualities have been around for a long time. Always stand for people in danger. Due to which she has incredible popularity in the area. As a result, she won the election.

When asked about his reaction to winning the election, Payal Khatun said that she is grateful to those who voted for her. She said that as a representative of the people, she will always try to be by the side of the people of the area.

She also said, "Besides trying my best to develop the area, I will try my best to improve the quality of life of women who are backward in the society. And, the common people will always try to uphold the dignity of that faith with which they voted for me."

The newly elected chairman of Kanchanpur Union Parishad Anichur Rahman said, "Undoubtedly her victory is a positive event. Since she has been elected as a public representative, she will always be supported by the council as chairman.”

Founder Secretary General of JusticeMakers Bangladesh and prominent lawyer and gay rights activist Advocate Shahanur Islam has expressed his heartfelt congratulations and best wishes her for being elected as members of the transgender woman in Union Parishad.

Advocate Shahanur Islam thinks that being elected as a member of the union council as a sexual minority is positive and encouraging for the backward sections of the society.

Advocate Shahanur Islam believes that through this victory, it is a victory against all discrimination, neglect, torture in family, society and state and inclusion in the mainstream of the society to the socially excluded transgender people in Bangladesh.

Advocate Shahnur Islam also said that last year, Nazrul Islam, a transgender woman, was elected as the chairman of Trilochanpur Union of Kaliganj in Jhenaidah district, moreover, in January this year, Shampa Khatun Popi, a transgender woman, was elected as a member in Fulhari Union in Shailkupa Upazila of Jhenaidah which are shining example in the Bangladesh. If the get equal opportunities as well as level playing field, transgender women can lead and play an important role in the development of Bangladesh.

Finally, Advocate Shahanur Islam urges to end the widespread discrimination against the people of the homosexual community subjected in their family, society, workplace and the state. He also urges to enact the homosexual minority people protection act recognising them in constitution as well as repeal the section 377 of penal code, which criminalise the same sex activities in Bangladesh. 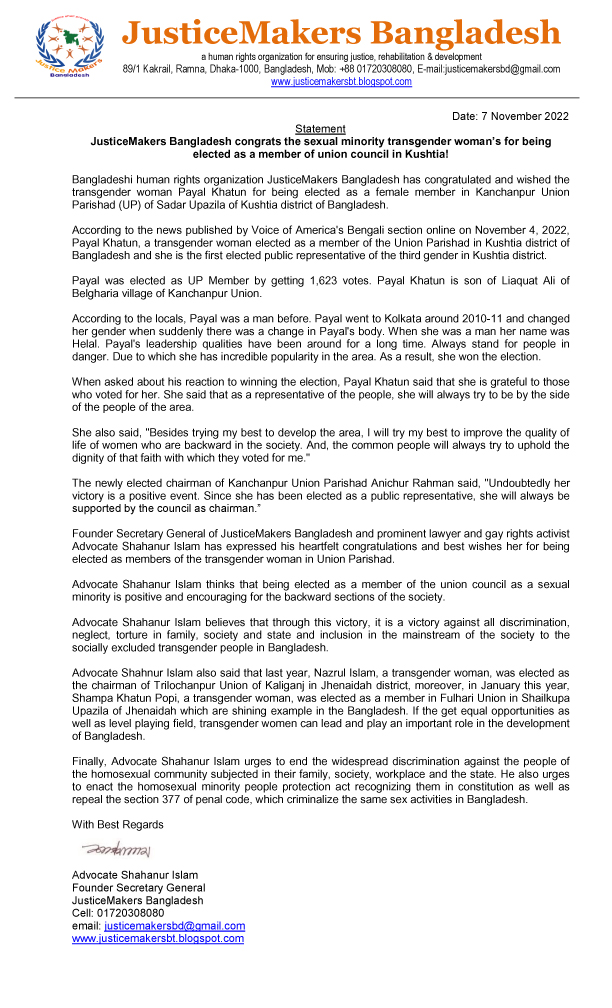 My Exclusive Interview with International Media

My Paper Presentation in International Level